Posted on February 25, 2020 by Julianne Victoria 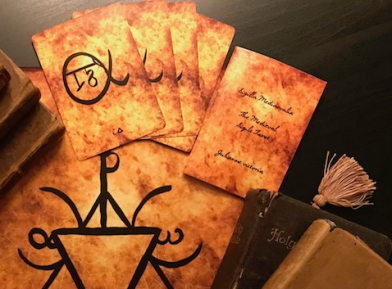 More than a few times I’ve been asked, “Is The Medieval Sigils Tarot really Tarot?” and many have asked for a little more information or a key for deciphering the sigils and symbols in Sigilla Mediaevalia, The Medieval Sigils Tarot. This deck was created as an abstract Tarot deck. It does follow the system of Tarot, but it has no words, people, or images…just the sigils and symbols.  From the Little White Book:

One day I wondered if I could create a truly abstract tarot deck, one with no words nor with images of people, animals, or nature. One that utilized only symbols, but not just symbols or signs that we could easily intellectually and consciously compute, such as the “?” symbol means a question. Rather my vision was to create a tarot deck of abstract symbols to motivate us to tap into our intuition and into the mysterious depths of our psyches, the subconscious.

I knew from the beginning that this deck would be a challenging one to work with, but I also chose not to put card meanings in the Little White Book (LWB), nor write an extensive guidebook, because that would take away from the experience, the inner exploratory experience, of working with something abstract. However, for those curious about getting The Medieval Sigils Tarot and to help work with the deck, I will share as well as add some helpful links and expand a bit upon what I did explain in the LWB as a Key to The Medieval Sigils Tarot:

I also did not want to put words on the cards, including the names of the 22 major arcana, in order to avoid intellectual distraction, though as you work with a card it will be normal for terms and textbook meanings that you have learned and associate with the cards to come to mind. See these as keys to open subconscious doors.

The sigils for the major arcana were created from their astrological rulership, their elemental associations, and the first letters of the essence words with either the Latin or Greek alphabet. The major arcana cards are titled with Roman numerals only.

Here is a talk I gave on Tarot & Its Astrological Associations:

The sigils for the minor arcana pip cards, those numbered 1-10, were created from their astrological correspondences or the astrological decan associations, their elemental associations, and the first letters of the essence words. For the 4 suits of the minor arcana, I chose, or more like was inspired and guided, to use a different script or alphabet for each one. They are as follows:

The Ogham is a Medieval script, usually used to write in Irish, and the letters are associated with trees. Hence I chose Ogham for Earth/Pentacles.

The Runes are said to have been discovered by the Norse god, Odin, while he was hanging from Yggdrasil, The World Tree. The myth of hanging Odin reminds me of the symbolism of the major arcana card, The Hanged Man, which is ruled or associated with Neptune and the water element. Hence I chose the Runes for Water/Cups.

The Alphabet of the Magi is attributed to either Paracelsus or Theseus Ambrosius, and it is said to have come from/been channeled from Archangel Raphael. It is a Hebrew/Semitic-based alphabet. Because Magi are wisemen, who oftened carried staffs (or magician’s wands), I chose this alphabet for Fire/Wands.

The Angelic Script, also called the Celestial Alphabet, was a language and writing system developed by ancient scholars (possibly Heinrich Cornelius Agrippa) to study and communicate with angels or the ethereal, angelic realm. Hence I chose this script for Air/Swords.

The minor arcana cards are titled with Roman numerals and the corresponding alchemical elemental symbol for each suit.

The court cards, traditionally the Page, Knight, Queen, and King, were created similarly but with seasonal correlations also used for the Pages and Queens. The Queens are associated with the cardinal signs of the zodiac, the signs that mark the beginning of each season at the solstices and equinoxes. The Page of the same suit as a Queen carries the energy of the preceding cross-quarter point, since Pages are messengers and seeds of something new coming. For example, the Queen of Cups is associated with cardinal water, the sign of Cancer, which begins on the Summer Equinox in the Northern Hemisphere, and thus I have assigned the Page of Cups with Beltane, the celebration of early summer.

The court cards are titled with Roman numerals: xi for Pages, xii for Knights, xiii for Queens, xiv for Kings, and the corresponding alchemical elemental symbol for each suit.

I hope this helps spark curiosity to explore not only sigils and abstract art, but also using them as tools for inner work and exploration. You can view a full flip-through and purchase Sigilla Mediaevalia, The Medieval Sigils Tarot here!

I am a Spiritual Counselor, Shamanic Healer, Writer, & Creator. I hope to help heal, teach, and inspire others on their souls' journeys and in this life. © Julianne Victoria and Through the Peacock's Eyes Press under the Common Law Copyright www.juliannevictoria.com
View all posts by Julianne Victoria →
This entry was posted in Tarot and tagged Abstract Art, Key, Keys to Subconscious, Medieval, Medieval Sigils Tarot, psyche, Sigilla Mediaevalia, Sigils, Sigils Tarot, symbols. Bookmark the permalink.

2 Responses to Key to Sigilla Mediaevalia, The Medieval Sigils Tarot