Posted on December 22, 2016 by Julianne Victoria

‘Tis the Season of Santa Claus, the jolly ol’ soul who traverses the globe with his sleigh driven by reindeer on Christmas Eve to bring toys to all the good girls and boys. The name Santa Claus morphed from Saint Nicholas, a bishop in the 4th century who helped the impoverished. However, Santa is also known as Grandfather Frost and Father Christmas, whose appearance was influenced by the Germanic and Scandinavian god Odin. During mid-winter (Jul or Yule) Odin would ride his eight-legged horse delivering gifts to the people, and thus he is believed to be one of the precursors for the modern day Santa Claus.

Overall, the persona of Santa Claus is that of a kind, giving, and benevolent being. But, like most of us, Santa has his shadow side too, and this should be acknowledged, lest his shadow side unconsciously take over his generous nature. When we suppress our shadows, our “dark side,” and pretend it’s not there, it will try to sabotage us. By acknowledging it, understanding it (this may take some time, of course), and integrating it into our being, that is, once what was subconscious comes to our conscious awareness, we enter into a state of becoming whole, of holiness, and of healing.

There are a few characters, known mainly in Europe, who represent the shadow side of Santa. Santa Claus is only concerned with those on his Nice list. Those on his Naughty list are for his dark companions or followers to deal with. There is Knecht Ruprecht, Santa’s servant companion, who may give bad children lumps of coal or broken toys, beat them with ashes or a stick, leave sticks for the parents to beat the naughty children with, or even abduct the children. 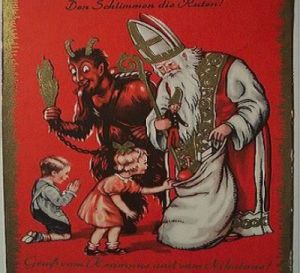 There is Belsnickel, a ragged-looking Nicholas (-nickel) who goes to homes to pelt (Bels-) or beat naughty children into being good. And there is Krampus, a demon-looking creature, who may also beat children with a branch, or he may take evil children to eat or kill. On a slightly lighter note, there is also Santa’s servant Zwarte Piet (Black Pete), who might leave naughty children coal or a bunch of twigs instead of gifts and sweets. 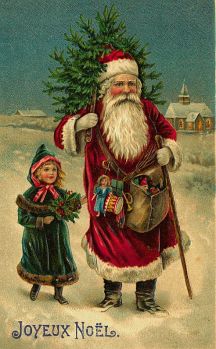 When Santa is looking over his Naughty or Nice List he must acknowledge his shadow side and toss the list out, for true giving is neither conditional nor judgmental. Santa and his shadow self united as a whole being knows that compassion, love, kindness, and charity for all is what the meaning of Christmas is all about.

I am a writer, spiritual life coach, and intuitive healer in Santa Barbara, CA. I hope to help heal, teach, and inspire others on their journeys and in this life. © Julianne Victoria and Through the Peacock's Eyes Press under the Common Law Copyright; My main Blog: www.peacockseyes.com
View all posts by Julianne Victoria →
This entry was posted in Psyche & The Dreamworld and tagged Belsnickel, Father Christmas, Jul, Knecht Ruprecht, Krampus, meaning of Christmas, Naughty and Nice, Odin, persona, reindeer, Saint Nicholas, shadow, shadow side, symbolism, Yule. Bookmark the permalink.

18 Responses to Santa & His Shadow