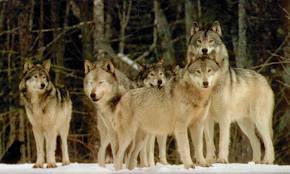 The wolf is a creature greatly feared. They are depicted in fairy tales, mythologies, stories, and movies as ferocious and murderous. As the Werewolf, they are one of the monsters that go bump in the (full moon) night and haunt dreams. Wolves are hunted world-wide out of humans’ fear of protecting their farm animals and families. However all of these are misconceptions about the wolf.

The wolf is an animal whose life is all about the family, the wolf pack. They only hunt to feed the family, usually in groups. They work together communicating with the group, and with intelligence, stealth, and skill provide for their pack, especially the young. They are social and friendly. Wolves are also very adaptable animals, able to move the pack when necessary (except when the pups are too young) and able to adjust to harsh climates. Overall the wolf represents:

Scary wolves abound in myths. Besides the Werewolf, there’s the bad wolf in the story of Little Red Riding Hood and countless other children’s stories, and in Norse mythology there is the monstrous wolf Fenrir, who was fortold to kill the god Odin, and Fenrir’s sons Sköll and Hati. Sköll chases the Sun through the sky trying to eat her (yes, Norse mythology is the only place that I’ve come across where the Sun is feminine and the Moon is masculine), and Hati chases the Moon. But there are also myths and stories that tell of the true nature of these loving and caring animals, such as the mother wolf who adopted the babies Romulus and Remus, who eventually founded the ancient city of Rome and the Roman Empire. The Mongols and Ainu people of Japan consider wolves to be their ancestors, and the Dena’ina people of Alaska treat wolves as brothers believing they were once human.

The intelligence and wisdom of the wolves, however, exists whether the stories about them are bad or good, and this may be why they also symbolize teachings of Spirit and provide guidance during meditations and dreams.

27 Responses to Animal Spirits: The Wolf