Lately I’ve been drawn to move closer to the beach and the sea. In Western astrology my Moon is in Pisces, whose ruler Neptune is in my 12th house. To sum that up, I have a tremendous amount of draw to and connection with the unconscious, the psyche, deep psychology, the shadow realm, feelings and emotions, intuition, and the dreamworld. It also means being near the ocean is more natural for me and good for my health.

As I research and ponder moving closer to the ocean I have come across sea creatures and sea images regularly, especially with the starfish. This morning on my friend Linda’s blog, Litebeing Chronicles, the image of a starfish “spoke” to me as if in affirmation of my wish and need to be closer to the ocean. 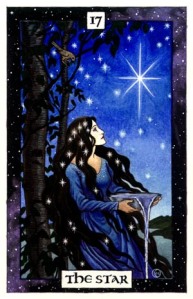 Synchronistically, the Star card of the Tarot has been coming up for me regularly in my daily spread. This card is about inspiration, imagination, being in tune with feelings, wishes, and dreams (daydreams, visualizations, goals/desires for life, and even unconscious dreams and their messages, especially if lucid).

The starfish is a sensory creature. It has no brain but a highly sensitive nervous system that allows it to feel its way through life in the ocean, whose tides are influenced by the Moon. This makes it very perceptive and very connected to the symbolism of the feminine, yin, the Moon, water, and the unconscious. Unlike us humans, the starfish cannot over-analyze things, and thus remains interconnected to the Universe. The stars in the heavens are represented by the stars in the ocean, and vice versa. As above, so below.

The starry vault of heaven is in truth the open book of cosmic projection, in which are reflected the mythologems, i.e., the archetypes. In this vision astrology and alchemy, the two classical functionaries of the psychology of the collective unconscious, join hands.

Starfish also have the ability to regenerate lost limbs. This symbolizes our ability to shed negative thought patterns, beliefs, attachments, and addictions, and to regrow, renew, and even rebirth parts or all of ourselves to become whole, holy, and healthy.

I am a Spiritual Counselor, Shamanic Healer, Writer, & Creator. I hope to help heal, teach, and inspire others on their souls' journeys and in this life. © Julianne Victoria and Through the Peacock's Eyes Press under the Common Law Copyright www.juliannevictoria.com
View all posts by Julianne Victoria →
This entry was posted in Animal Spirits and tagged astrology, dreams, Jung, nature spirits, ocean, Pisces, San Francisco medicine healer, shamanism, star, starfish, symbolism, Tarot, unconscious. Bookmark the permalink.

28 Responses to Animal Spirits: The Starfish