Posted on October 14, 2013 by Julianne Victoria 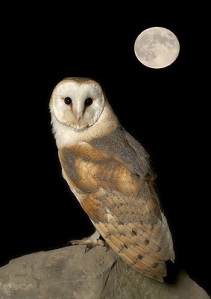 I tend to rise early in the morning, and with the days getting shorter, that means I’m up taking my Alaskan Malamute pups out for their morning walk while it is still very dark out. This time of year also means I have the opportunity to do some stargazing while out and about. This has been very exciting lately as Jupiter has been very visible with the twins Castor and Pollux in Gemini (as was red Mars before he moved along) as well as Sirius in Canis Major and all of Orion. It is quite the morning experience to be greeted by this as I walk out the front door.

A few mornings ago as I was looking up into the heavens, I was greeted with a surprise: an owl! In all my life, I have never seen nor heard of anyone in the generations of my family having seen an owl in the city. Though I am sure there are some in the vast city parks, this was truly a surprise. This owl flew right above me as I was looking at the constellations. His large wings with a golden hue flapped silently with power. I watched until he flew over Twin Peaks and out of sight. I was in awe. The wise and majestic owl, the master of the night, the keeper of secret knowledge, and dear friend of the Moon just unexpectedly flew by.

Most of us have probably heard of the wise owl, but the owl’s symbolism goes much deeper. As creatures of the night, they are connected with death as the keepers of spirits, companions for souls going to the underworld, protectors of the dead, and guides for transitions. They are a link between the world of light and the living and the world of darkness and the unknown.

Besides bearing wisdom, insight, and intelligence, owls are keepers of sacred (and secret/hidden/occult) knowledge, and are even thought to be seers and mystics that have shape-shifted. Like all birds, owls are also messengers, particularly of secrets and omens. Owls have keen sight and are silent and stealth flyers, who hunt by the light of the Moon. Thus they also represent dreams, psychic abilities and awareness, and the shadow self.

One does not become enlightened by imagining figures of light, but by making the darkness conscious.

How can I be substantial if I do not cast a shadow? I must have a dark side also if I am to be whole.

16 Responses to Animal Spirits: The Owl