Posted on February 17, 2013 by Julianne Victoria 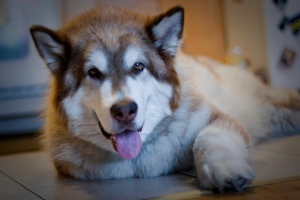 of whether we’re looking for one or even know we need one. A few years ago this happened to me, quite unexpectedly, when I met Simba. My teacher wasn’t a Zen master, or a lama at the local Buddhist center. He was no ordinary teacher; he was a dog.

When I adopted Simba through a rescue group, I learned much of his history from his foster mom, who had taken care of him for the previous three months, and from the woman who had freed him from the chain he had been hooked to for nearly four years. He had been neglected, barely fed or given water, and was so lacking in exercise that he was hardly able to use his hind legs. After being rescued he had to be shaved to remove the parasites in his fur, and he had other skin and health issues. Worst of all, he had chewed on his infected paws so severely that the vets had at first thought he had chewed his toes off. He was still in bad shape when I brought him home, but I was confident we could get him back to health.

Physical health, that is, but how was this sentient being going to heal emotionally, mentally, and maybe even spiritually? I was a bit scared. He weighed nearly a hundred and fifty pounds! Would he be angry as a result of his experience and act disobediently and aggressively? How would he behave with other animals, children, women, and men? To my amazement, he turned out to be a gentle giant. He respected the smaller animals in our home, adored meeting babies and toddlers on our walks, never showed any aggressive behavior to anyone, and brought smiles to the faces of everyone he met.

As he got healthier, our walks got longer and we could go faster, especially when the weather cooled off. With more to explore, he’d want to stop and sniff the plants and flowers to see whether any of his dog friends had been by. On those cold morning walks, especially if it was raining, I’d tug him along and grumpily tell him we had to keep moving. He did like to lollygag, to take in life and enjoy it. He seemed at peace with the world and didn’t see why I needed to rush. It was true. I didn’t. I was just being impatient, wanting to hurry to get on to the next thing. And what did I have to be angry about? A little rain, a little chill was nothing terrible to endure. It’s just nature doing its thing. I realized that every day in so many ways he showed me how to experience the moment and practice patience.

Even when he was dying he brought happiness to all around him, despite the pain the tumors throughout his body must have been causing. Right up to the end, his soft eyes would remind me to be patient and appreciate the moment.

What an amazing journey his life had been. After enduring years of neglect, abuse, illness, and disease, this dog exhibited nothing but kindness and respect for others. It must have taken great inner strength to have not only persevered, but to have come through the fear and suffering with only love in his heart.

I am grateful to have had a teacher who taught me not through words, but through his personal story, experience, and actions. No matter what life threw at him, he practiced patience, taught love, and spread only joy.

No evil is there similar to anger / No austerity to be compared with patience…There’s nothing that does not grow light / Through habit and familiarity. / Putting up with little cares / I’ll train myself to bear with great adversity! / Don’t I see that this is so with common irritations: / Bites and stings of snakes and flies, / Experiences of hunger and of thirst, / And painful rashes on my skin? / Heat and cold, the wind and rain, / Sickness, prison, beatings – / I’ll not fret about such things…For is not patience the supreme austerity?

– Shantideva, Bodhicharyavatara (The Way of The Bodhisattva)

– The original version of this article first appeared in Buddhadharma magazine.

I am a Spiritual Counselor, Shamanic Healer, Writer, & Creator. I hope to help heal, teach, and inspire others on their souls' journeys and in this life. © Julianne Victoria and Through the Peacock's Eyes Press under the Common Law Copyright www.juliannevictoria.com
View all posts by Julianne Victoria →
This entry was posted in Animal Spirits, Health & Healing and tagged animal rescue, animal spirits, Bodhisattva, Daily Prompt: Mentor Me, healing, Love, No Ordinary Teacher, patience, Shantideva, spiritual health, zen. Bookmark the permalink.

32 Responses to No Ordinary Teacher