Animal Spirits: The Raven/Crow and The Hummingbird 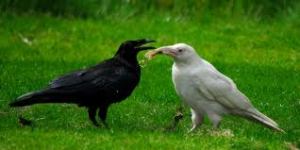 A black and a white crow

Late this morning I came across Symbol Reader’s post: I Love You, My Secret Raven (a great read for those of you who like Kafka and psychological astrology!). About ten minutes later I heard the kaw-ing of crows outside my window. Ravens and crows were a very rare sight in the city when I was growing up, but nowadays it’s not unusual to see a few here and there. However, I was very surprised and intrigued to see a murder of crows congregating in view of my window: in the trees, on rooftops, and even several walking on the sidewalk. As I watched, more and more gathered. Knowing that they are messengers of sacred law, I asked them if there was anything I needed to know or do. The response I “heard” was that the change I have been perceiving is coming and to accept and work with what comes. At that moment a hummingbird appeared, circling about, in the middle of the this whole scene, and then a dove flew by. Then in a blink of an eye, all the birds flew away.

Crows and ravens are part of the Corvidae family, which also includes blue jays, stellar jays, and magpies. Crows and ravens are often feared, partly because they are usually black (but occasionally white – the Greek god Apollo is said to have turned the crow from white to black after his white crow failed to peck out the eyes of his lover’s lover) and thus associated with death, and partly because they are very smart scavengers who will congregate around recently deceased animals and humans (such as in a battle field). They are associated with death, war, and bad omens across many cultures from Australian Aboriginal myths to the Celtic goddess the Morrigan.

Though the Morrigan, who was also called the Phantom Queen, was the goddess of war and death, she was also a great prophetess. The future is something that is hard for us to prophesy for it is the unknown. Like the raven and the crow the unknown is pitch black, dark, and frightening for many of us. The raven/crow’s symbolic representation of death/change and its portending of bad prophesies is a matter of perception. If viewed through fear, change will seem unpleasant. If viewed with openness, doors of opportunities for growth, understanding, and wisdom will open. Crows and ravens can be our guides as we step into the unknown.

The Raven and Crow symbolize: 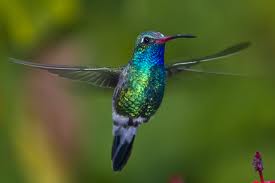 live in tropical environments, they inhabit the full length of the Americas from Alaska to the southern tip of Chile. These are high energy and long-distance migrating birds with amazing flight maneuverabilities. They also have beautiful and sometimes shimmering colorings. Hummingbirds are a joy to see and to watch, lighting up any dull moment. The local Native Americans, the Ohlone, believe it was the hummingbird that brought fire (light) to man.

I’ve been sensing big change is coming, but I am confident that it will open up doorways that will lead to even greater peace, love, light, and joy.

37 Responses to Animal Spirits: The Raven/Crow and The Hummingbird